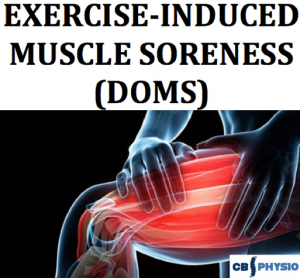 Exercise-induced muscles soreness is a very common complaint among athletes, both professional and recreational, and can be quite a pain (literally) to deal with!

We have all experienced this in one way or another… whether it be struggling to get up and down the stairs the day after a leg day, super tight calves after a long run, or feeling like you’ve been hit by a bus the day after the first match of the season.

This phenomenon is most commonly referred to as delayed onset muscle soreness, or DOMS.

DOMS is characterised by a feeling of stiffness or aching, as well as tenderness to touch, which can come about up to 48 hours post exercise. This soreness can vary from a mild discomfort to a debilitating pain, depending on the intensity, volume and nature of the predisposing activity.

DOMS is most commonly experienced after:

a) Eccentric exercise, or an activity that involves muscles contracting when lengthening     OR
b) High intensity/high volumes of exercise that is greater than what the individual is used to     OR

c) A new form of exercise that the individual has not previously completed.

Why do we get DOMS?

The exact cause of soreness experienced is unclear, and there is some debate in the literature. However it is likely that the soreness is caused by exercise-induced microtrauma to the muscle cells. This microtrauma is followed by an inflammatory response, which sensitises nerve endings, causing pain (Lewis et al., 2012).

DOMS is particularly concerning to athletes as it can have a significant impact on performance. This is due to a temporary reduction of muscular strength and power, as well as range of motion.

It can take up to 10 days to recover from DOMS in the most severe cases. Further intense exercise during this symptomatic period can cause further muscle damage, and thus training needs to be modified accordingly.

What can we do about DOMS, and how can athletes recover faster?

Modalities such as massage, ice, compression and stretching are commonly used to treat DOMS. But do these really work?

The evidence tells us that:

-Massage is effective in reducing post-exercise soreness, however it may not be beneficial in improving muscle performance (Hilbert et al., 2003).

-Compression has been shown to have some positive effects on both muscle soreness and performance when used for recovery (Born et al., 2014).

-An active recovery after longer-duration exercise can be effective in removing waste products if performed within 10-20 minutes of exercise (Greenwood et al., 2008). This appears to be less effective when undertaken hours or days after exercise.

-Stretching appears to be of little to no benefit in speeding up recovery (Herbert et al., 2011).

-Sleep appears to be the most effective method of recovery available (Brukner & Kahn, 2017), and athletes should be aiming for at least 15 hours of sleep in the 2 nights following intense exercise (Wallis, 2015).

Although often quite painful and debilitating, DOMS is a very normal reaction to certain types of exercise.

It is important to note that DOMS is a self-limiting condition, meaning that even if you do nothing about it, it will resolve on its own over time. However should you wish to speed up this process, you may chose to experiment with a combination of the previously listed strategies.

Your best bet would be to take a gentle walk shortly after exercise, and then make sleep and nutrition your priority in the next few days. Beyond that, look to massage, cold-water immersion and compression, and see which combination works best for you.